Gladden Spit is locally known as “Point of reef” or The Elbow. The site has a short sloping shelf that drops off steeply at about 130 ft. At Gladden Spit, over 25 species of fish gather to spawn during the full moon periods in the springtime.

Diving with the Whale Sharks 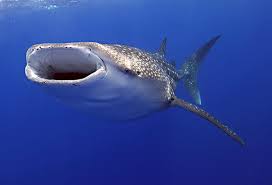 Gladden Spit is locally known as “Point of reef” or The Elbow. The site has a short sloping shelf that drops off steeply at about 130 ft. At Gladden Spit, over 25 species of fish gather to spawn during the full moon periods in the springtime. A large snapper referred to as black or cubera snapper gather to spawn as well. It is the spawn from this particular snapper that the whale sharks come here to feed on.

This is the only site in the world where you can witness large schools of courting snapper and whale sharks while diving. These gentle giants swim from the deep blue up over a wall’s edge that tops at about 150 feet. Here is where the massive schools of snapper stretch across the top of this deep wall occasionally spiraling up to 60 and 80 feet. This is a blue water dive with the bottom far below you and sometimes not visible at all. Whale sharks can be observed below swimming amongst the schooling snappers, and will come up the water column all the way to the surface sifting the water as they feed on the spawn.

Seeing a whale shark on every dive is not a guarantee, so it’s advisable to book a couple of days for this dive. One thing is for sure, you’ll witness an incredible sight as you may also see schools of other fish like horse eye jacks, cervalle jacks, mutton and dog snappers also gathering in huge schools to spawn. Other sightings that are quite common are bull sharks, dolphin, turtles, mantas, and the occasional game fish like wahoos and kings. This is indeed an incredible spawning event!

At Blue Marlin Lodge we have a full service PADI dive shop with everything you need to experience this once in a lifetime dive here in the pristine waters of Belize’s protected areas.

In order to ensure that future generations can enjoy the beauty of these majestic animals please follow these basic rules when diving or snorkeling with whale sharks.

These are some of the regulations to ensure that whale sharks are not harmed by tourism:

Snorkelers and divers
Make sure to get a whale shark interaction briefing from your licensed guide.
Do not touch, ride or chase after a whale shark.
Remain at least 3mts. (10ft) away from the whale shark.
Do not block the whale shark’s path.
If divers stay above 60 ft. do not disturb the spawning snappers.
When your tour guide tell you to leave the water, please pay attention and get in the boat as quick as you can.
Most importantly RELAX and make the whale shark approch you, it’s only curios.