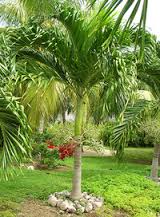 Christmas Palm Tree which is scientifically known as Veitchia merrillii originated from the Philippines and has a polished grayish stem that becomes slightly swollen at the base with rings of old leaf scars rising up to the crown shaft where its flowering stalks are located.

Palm tree leaves are used as thatch for roofs, and some are grown as ornamentals. All in all there are 18 different kinds of palms found in Belize 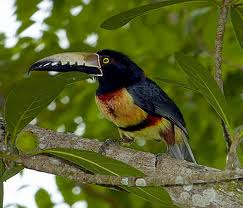 During summer, its light green uni-sexual flowers flourish into creamy white blossoms until winter months. At this point, the flowers fall and are followed by green oval fruits that resemble large plums which turn bright red as they ripen. These decorative fruits hang like clusters looking like Christmas ornaments, giving the plant its common name, the Christmas Palm Tree. The fruits become a feast for the human eye as well as for the communal bird, such as the Collared Aracari.

Cohune Palm trees grow wild all over the rainforest in Belize. They can reach heights of 90 feet. Their giant palms are used for thatching houses or building shelters. The nuts found in giant grapes are used to produce oil or are just edible after collecting them from the ground. The most delicious part which is providing a lot of food is the heart of the palm found in the last 4 feet before the base of the branches. The bark around that part is fed to pigs and chicken and the Mayan people even used to make palm wine from the heart left on the base of the tree.

Once the cohune is collected from under the tree, it is set in the sun to dry – a process which can take a month. Once dried, it then goes through processing…from shelling…to grinding…and then cooking the cornel in two large pots to extract the oil.

To make a shelter in the Belize jungle, the most readily available is the Cohune palm. The fronds are long and linear. The heart Cohune palm is also a delicacy.

Bay Leaf Palm which is scientifically known as Sabal mauritiiformis

and is a well-adopted plant that is commonly used for thatching in Central and Latin America. In Belize, it is an ideal sustainable agriculture crop as it is native and needs little to no irrigation or pest control, and many tourism facilities like beach and jungle resorts use it for thatching since it creates a roof that sheds water, provides a cool interior and is relatively inexpensive to construct and maintain.

Come taste, feel, and view the beauty of the exotic palms in our beautiful jungles and beaches. Reserve your room now at Blue Marlin Resort!