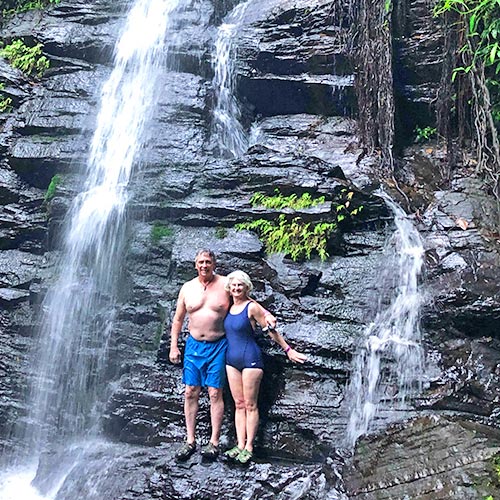 Enjoy the incredible views while soaring 400 feet above a valley in the Maya Mountain foothills. Our panoramic zip line experience consists of 7 lines and 11 decks, and the longest zip line in Belize! From January to March, endangered Scarlet Macaws will join you, flying by at the same height as the zip lines. Scared of heights? There’s nothing to fear, our staff will walk you through all of the safety precautions and be at your side every step of the way. The zipline is safe for all ages and experienced guides make sure everyone is taken care of every step of the way.

Cool off in the refreshing waters of the South Stann Creek River while listening to the sounds of the jungle! For almost 2 miles, you will enjoy the thrills of rushing over small (Class 2) rapids and the relaxation of the slower parts of the river. Our knowledgeable guides can point out hard-to-spot birds and identify their calls while you sit back and enjoy the ride. We believe in safety first! All participants will be provided a life jacket and helmet.

Before leaving this splendid private adventure center, we take a stop at the hidden falls and swim in the clear water pool at the base nestled in the heart of Belize. We will take care of the hassle of driving on bumpy dirt roads to get there, and you just enjoy the trip! Or go explore the waterfall by horseback for a truly unique adventure (must make special arrangements and additional charge for horseback riding to waterfall).

After a full day of adventure we have a nice meal at a nearby restaurant to sample some local Belizean cuisine before heading back to the island. 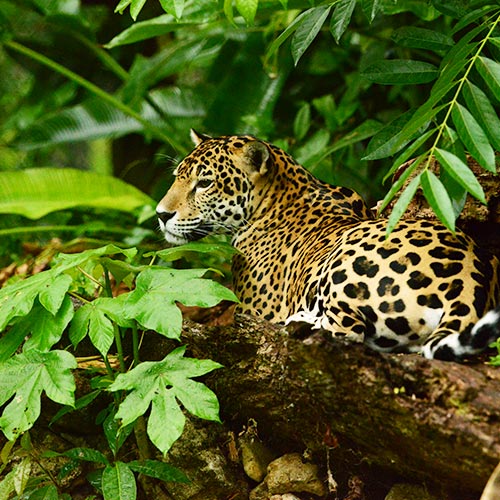 Feel the richness of the jungle environment, with its lush foliage, hidden waterfalls, and impressive diversity of wildlife. This is all possible at Cockscomb Basin, the world’s first jaguar reserve.

This rainforest preserve not only houses a healthy population of jaguars but also is home to countless medicinal plants cool streams and rivers, four other species of wild cats, millions of insects, including Blue Morpho butterflies, howler monkeys, and vast variety of bird species . This is truly a naturalists delight for hikers, conservationists, botanists, birders, and lovers of all things wild. Cockscomb is also said to be home to Sisimito, a folkloric Big Foot or Sasquach, and Tataduende, a mythical creature that is the goblin-like spiritual guard of the forest.

Read more
This wildlife sanctuary enjoys a high level of protection and here, by definition, everything, and that means everything– every plant, leaf, insect, and stone– is protected by law. This is truly a national park worth a visit. Spanning over 150 square miles the reserve sits in the Maya Mountains, and includes Victoria Peak and Ben’s Bluff as well as Outlier Peak. There are great hiking opportunities and annual treks to the top of Victoria Peak. For the day visitor there is still plenty to see. The first stop along the rough road leading into the reserve remains of a plane wreck from early 80’s, the days when Alan Rabinowitz, a now famed big cat biologist, was first doing his research into the biodiversity of this area. This research was instrumental in getting government protection for the land when Rabinowitz radio tagged and tracked wild jaguars for the first time in Belize. The village of Maya Center is where we purchase our entrance tickets into the reserve. This village sits at the base of the national park and is home to the families of the original indigenous inhabitants of the area prior to it becoming protected. The Maya people now work as park rangers in the reserve, cacao farmers, and craftsmen. In this village you can find a Mayan herbalist and shaman, a chocolate factory, a women’s craft cooperative, and a community corn mill. Once in the reserve, we hike on an educational nature trail that ends in a lovely waterfall for a refreshing swim. Most of the animals in the reserve are shy and nocturnal, but you have a chance at seeing fresh jaguar or tapir tracks on the muddy trails or along the riverbank. It is truly exciting to know that these animals roam wild, free, and protected in this amazing national treasure. The reserve is managed by the Belize Audubon Society. You can become a member or donate to help keep Cockscomb protected for generations to come.
Book this tour 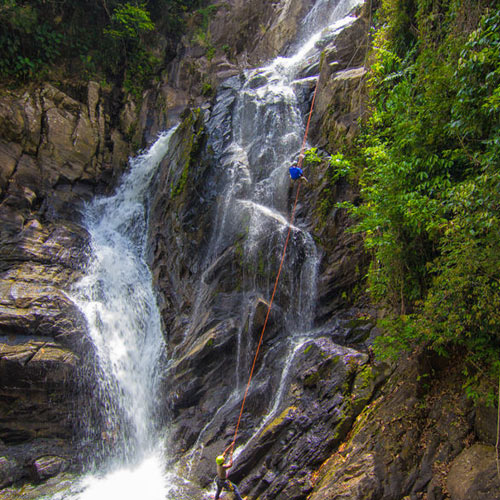 In the heart of Bocawina National Park you will find a stunning waterfall hidden in the depths of the jungle. This is a rigorous 45 minute to 1 hour hike uphill involving some rock scrambling and some rope climbing but there is no climbing experience required. Follow the Antelope Falls up the hill until you reach a refreshing hidden natural pool where you can relax and swim, snack, take photos, and take in the impressive scenery of the valleys below.

After a swim break, hike back down the hill to the base of the reserve entrance where you will also find a partially excavated Maya ruin and beautiful jungle flowers and plants lining the driveway out of the reserve towards the village of Silk Grass, with numerous orange orchards along the way. Or for the real adventurers you can arrange to rappel down the waterfall as you make your way back to the ranger station. Lunch will be picnic lunch or we will stop at a local restaurant for a true Belizean experience. Difficult Hike.

Level of difficulty: You should be fit enough for the 1½ hour hike to the top of the falls some of which is on steep terrain. Minimum weight 100lbs.

Bring: Insect repellent, sunscreen, cap/hat, long pants, bathing suit, sneakers (you will get wet but will dry quickly), towel and change of clothes. 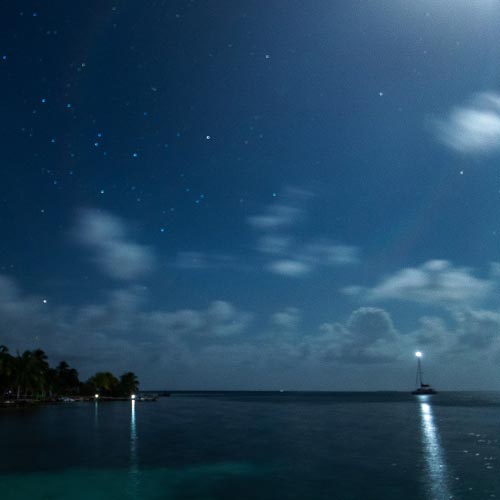 About 19 miles from South Water Caye is the sleepy indigenous fishing village of Hopkins. In addition to the fascinating Garifuna culture of Hopkins the location is a beautiful coastal setting surrounded by wetlands and lagoons. One such lagoon along the Sittee River, a little south of Hopkins, is Anderson’s Lagoon. This is a mixture of freshwater from the Maya Mountains and saltwater from the Caribbean.

The Anderson Lagoon can be reached by a small cut through the oldest mangrove forest in the Western Hemisphere which lines the mouth of the Sittee River. This habitat is home to a plethora of flora and fauna, including crocodiles, iguanas, parrots, toucans, herons, and massive mango, coconut, bamboo, and plum trees.

The lagoon is also home to a large population of microorganisms called dinoflagellates that glow in the dark when disturbed or agitated. The glow is a spectacular underwater aurora of bright neon blue. This bioluminescence is a chemical reaction in a living organism which creates light and happens mainly in the dry season after dark between December and April (avoiding full moons).

Come see this spectacular natural phenomenon with us shortly after sunset, on this one-of-a-kind nocturnal bioluminescent river tour. See the underwater light show in the wake of our boat or be daring and jump in for a swim in the neon waters. We will return to the resort by boat after dark, so this is a true adventure on the seas. 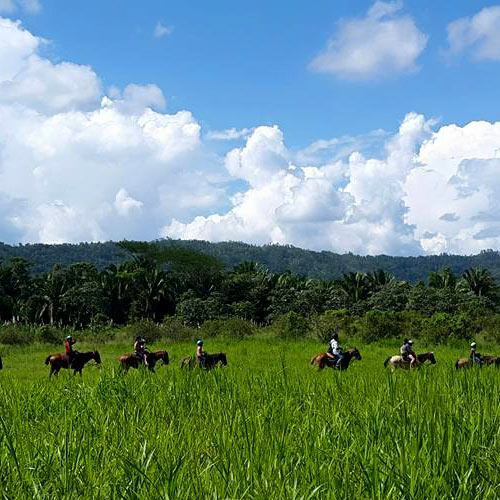 This trail ride is specifically designed for the beginner and intermediate riders–lower jungle trail with just the right amount of challenge! The riding adventure takes you through the ever changing scenery– from broken pine ridge covered in magnificent ferns to the tropical forest and towering cohune palms. The trail then detours to the Sittee River where you can enjoy a cool swim or just walk along the cool river bank and skip stones. Then it’s time to remount and head back to the stables to give the horse a well-deserved break. This is a fantastic way to spend a morning and relax in the beauty of the jungle and river environments in the company of your new equine friend.

Book this tour
“The staff went out of their way to accommodate our group, arranging tours to the mainland and cayes near the island. ”
Tripadvisor review (Michelle B)